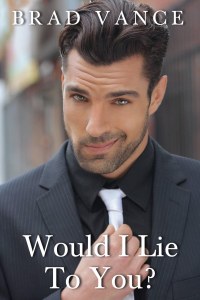 It’s true!  “Would I Lie To You” will be out by the first week of May at the latest.  I had to “decomplicate” some things and change some of the dynamics.  There was going to be a great betrayal, how can I ever forgive him, etc. but it just wasn’t working.  I know, I know…I should STOP THE ACTION for a hundred pages so the two characters can ANGST for a while.  Look, trust me, there’s angst aplenty in the pages to come, but it’s angst that must be processed during intense action, not woe is me I’m staring into space now angst.  Anyway.  Soon, my pretties, this book shall fly, FLY!  And it’s totally setting up for book two.  Can’t believe I finally managed to start a series…

But.  Since I have NO CLUE what happens next with Marc and Jesse, I’m just gonna violate another publishing rule (always publish the next one in a series ASAP) and move over to the story of Officer Joe.  Yeah, that outline is percolating like a mofo.

And you know, it’s pretty much impossible to write a book about a cop these days in a vacuum, since there are so many bad cops.  Joe is one of the good ones, naturally.  He’s a country cop, dealing with a small NoCal town and its attendant rural criminal population.  But his potential boyfriend Greg has had some bad cop experiences, and he’s a classic San Francisco homoliberal.  So there’s that.

Which got me thinking on a defense for Joe to use in conversation with Greg.  Which goes something like this.  WIP don’t shoot me…

“Just look at how many bad cops there are,” Greg insisted.  “Like…shit, it feels like all of them are some days when I watch the news.”

Joe had been thinking about this for a while.  “Okay, I have a scenario for you.  Imagine that in every operating room, there were web cams, or the family was in a viewing area with cellphones.  And you could record the doctors’ every move.  And if the operation was botched, you’d have the proof.”

“Right,” Greg agreed.  “You should be able to do that.  Because just like cops, doctors cover for each other.  Even if they know it’s a bad doctor.”

“Right, but…bad doctors couldn’t run for cover anymore if there were cameras everywhere, could they?  They could fuck up a surgery, and they could no longer come out and say, we did all we could, if there was evidence that he fucked up, had shaky hands and operated anyway, and clipped an artery or something.”

“So what are you saying?”

“That there are bad eggs everywhere, in every system.  But only cops get filmed being bad cops.  Doctors don’t get filmed being criminally negligent doctors, but that happens every day.  Any bad cop is too many bad cops.  And it’s good that they get caught.  But it doesn’t mean all cops are bad, or that only cops are bad.  They’re just the only ones on camera.  Yeah, every cop should have a body camera.  But, you know, a lot of other people should, too.”

2 Comments on Two weeks (at most) from finishing “Lie”! And, thoughts on “Officer Joe”…