And this is the cover.  I know, I know, should be three wolf moon blah blah. But THIS IS THE COVER for this story. It just is. So Let It Be Written, So Let It Be Done.

I am loving this story. The percenters will hate it because we’re more than halfway through and the MCs aren’t sexin’ yet. Maybe I’m changing – it just made sense for Marc and Jesse, too, the delay. Maybe buildup is more exciting to me now than just mashing MCs together like a pre-adolescent boy with his sister’s Ken and Barbie, makin’ em kiss moosh moosh moosh.

This story is about an awakening.  Transformation isn’t something that happens overnight.  Que sera sera, saleswise, but I know #TeamVance will love it.

And yes…it starts out hard and fast, in accordance with Lord Commander Bezos’ new orders.  Gotta keep those pages turnin’…  See for yourself 🙂 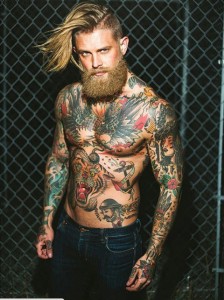 CHAPTER ONE – THE LANDSCAPE OF FEAR

In a strange moment between pulses of terror, Brandon Ace realized that he’d never felt so alive.  All his senses were alight, all in overdrive as they registered the multiple threats.  He’d seen the pack of dogs sitting there in the parking lot, the flat discs of their hunters’ eyes reflecting the bright lights of New Meadowlands stadium.  He heard their low growls, and a breeze brought the smell of their wet, wooly fur to his nostrils.

He was in the middle of a triangle, equidistant between the refuge of the stadium, his Mercedes-Benz CL65, and the wild animals staring at him with…almost human anger, he’d have sworn.  He’d gone big game hunting in Africa, paying to shoot a wild animal, so he could be photographed standing in triumph on the neck of a dangerous giraffe.  He’d listened with fascination to his guide describing the hunting methods of packs and prides, and now here he was, the hunter soon to be captured by the game.

Brandon had a handgun, illegal as hell in New York City, but when you were the owner of numerous “lower end” apartment buildings, you had to defend yourself from the crazies who’d personally blame you for the lack of heat, or the mushrooms growing out of the walls soaked with water from broken pipes.

He’d brought it with him tonight, but he’d left it in the car.  It had seemed inappropriate to pack it to a meeting of his fellow real estate developers.  They’d met in secret here in New Jersey, far from prying eyes, to discuss a potential eminent domain seizure of more prime Brooklyn real estate near the Atlantic Yards development – that is, “Pacific Park Brooklyn,” as it was called now.

This was his big chance, his ticket out of the slumlord business.  He’d worked like a dog, snapping up dingy old apartment buildings across Brooklyn, Queens, the Bronx, and turning them in to flophouses for recovering addicts.  “Three quarter houses,” they were called, not permanent housing but not a halfway house – halfway houses were monitored, regulated, for compliance with health and safety codes.  Ace could cram a three quarter house full of men, and collect $215 per resident per month in “shelter allowance” from the city’s Human Resources Administration.  Then he’d get more from Medicaid to pay for their “treatment.”

Now the goddamn New York Times was doing an exposé and his whole business model was at risk.  Fucking do gooders!

Then the dogs moved.  Shit.  They weren’t dogs, he realized.  They were wolves.  What the fuck were wolves doing in Jersey?  There were three of them and he watched them split up, one moving towards the stadium’s office complex, one towards his car, and the last one trotting towards him.

He ran.  He knew he was doing exactly what they wanted, but he had no choice.  The long sigh of the freeway on the other side of the stadium had finally ended, as they pushed him across the parking lot, towards what was left of the eponymous meadowlands.  This was bad, he thought.

There was a scattering of trees on the edge of the lot, between the lot and the meadows.  If he could find a big enough branch, he could fend them off long enough to dial 911.  Brandon had grown up on the streets of Bed-Stuy, and he was prepared to handle himself.

Yeah, some part of him suddenly felt alive, ready to fight.  Packs of feral, fetal-alcohol syndrome kids had been his hunters in his childhood – at least wild animals were more predictable.

They rounded on him, letting him make the tree line.  That was when he realized his mistake.  Out here nobody could see him, nobody would find him if…

“Fuck you!” he shouted at them.  “Yah!  Yah!”  He waved his arms wildly, trying to make himself a bigger animal than he was.

They…grinned at him, tongues lolling.  Took a formation…what the fuck?  The lead, the alpha male, was the point of the V as they moved in on him.

Fear gripped him now.  Three against one, and this wouldn’t be a beating like the ones that had hardened him as a kid.  This would be…

The alpha stopped, only six feet away.  Its eyes were so bright, blue flecked with yellow, so…human.

Then they…changed.  They got up on their hind legs and…extended.  Transformed.  Into men, but…not men.  The alpha had piercing yellow eyes to match his wild blond hair, and his tattooed hands ended in long fingernails…no, too thick for that, they were…claws…

A flock of ravens circled overhead, squawking, ready to pick at…the remains of a wolf’s meal.

“Brandon Ace,” the alpha said.  “You’ve made your last deal.”

“What the fuck are you?”

The alpha smiled, grinning wide, revealing teeth that hadn’t changed at all from their animal form.

“We’re the hand of justice.  We’re the spirit of Brooklyn.”

He screamed as they leapt at him, the ravens screaming with him.  But only for a second, before the alpha’s jaws locked on his throat.