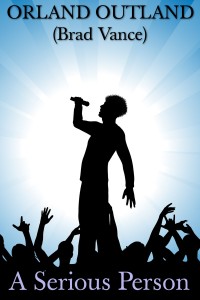 Yep, the only other “Orland” book I wanted to republish, now “In Review” at the ‘zon. Man, did it ever need an edit. This light comedy went from 70k to 55k and it’s so much better for it. I had so many rants and asides and digressions… It was a great exercise for my editing muscles, for sure.

I didn’t flog “Different People” because it was so “unBradlike” a novel, so dark and heavy, but this one? This one I’m gonna be logging the flogging hardcore. It’s still funny. Hell, it’s funnier now than it was then, in its New Revised Version.

And the best part is, if it takes off, and I have a funny feeling it will, it literally buys me time for the werewolves. I’ve really felt under the gun about $$, and if this brings in said $$, I don’t have to rush to finish “Werewolves of Brooklyn.”

And the an$iety on the financial front is dimming a bit already. In addition to picking up some editing work, my new master, Lord Kenpc of Amazonshire, is treating me a bit better lately. I haven’t achieved parity with what I was making last month, but, whereas my KU income started July at about 50% of what it was in June, it’s now trending upward, and is at about 70% (that last dip is pages so far today):

Personally, I think that aberration at the beginning of the program, that first week of rise and plunge, was Amazon working out their software kinks. But since they tell us nothing, we’ll never be sure. At any rate, I know I’m doing a lot better than some other poor bastards. And that’s with no new titles pubbed, either. Well, DP but that hardly counts.

I put up some freebies last week as well (don’t ask me why I totally forgot to flog them here), which reminded me of the Power of Visibility – see how my borrow pages rose after six days of freebies (Sam and Derek, Nick and Kyle, and Given the Circumstances). PRO TIP – 2 days is your max value for a freebie.

I gave away 1600 copies of GTC, thanks to some autobots that flag a sudden freebie, and the folks who Tweet the fuck out of that. For some reason, Sam and the Stepfuckers didn’t trigger it, maybe because they’re classed as “erotica” and GTC is “romance.” I also put a large preview of “Have a Little Faith in Me” at the back of GTC for this promo, since it’s one of those “if you like this you’ll like that” pairings. I did that for ASP, too, adding a chunk of “Apollo’s Curse” to the back there.

I’ve been working on reducing my caffeine, and increasing my sleep. A lot of why I got stymied on “Werewolves” was about what stress does to me. I refused to leave the computer every day, thinking OMG WOLF AT DOOR NEED MONEY as if just sitting here longer and longer would generate more content/income. I wasn’t taking walks, I wasn’t eating right, I was making up for sleepless nights with more coffee and then, I discover at the dentist, grinding my teeth at night because money. So I was getting more and more tired and unfocused and trying to fight that with more of the things that made it worse.

The very hardest thing for me to accept is that Rome wasn’t built in a day, and I am building my own personal Rome here, a vast empire of books and audiobooks and who knows what else. And Rome burned on July 1st, no doubt, but I’m rebuilding.

The most fascinating part of Stacy Schiff’s “Cleopatra” bio, which I hope they keep in the movie, is that when Caesar came to Alexandria, Rome was a brick and mud shithole – it was only after the Romans saw the magnificence of Egypt that they went back and started building their great marble edifices. The “glory of Rome” was a long time coming.

2 Comments on Sent to Press! “A Serious Person” out today!