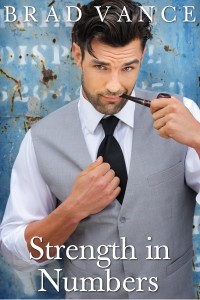 Yeah, so I have a pretty good overall plot for Strength in Numbers. Still some more research to do, but it’s getting there. Adam Vance is finishing up the first draft of Artifice this week, so “Brother Brad” will be back in the saddle. Moving into science fiction and mainstream thrillers are all part of the Swiss Family Vance’s master plan for world domination!

I know, I know, how much I’ve raged against the word “excited” as used by, well, anyone. Every crappy thing any corporation does is an “exciting change/announcement/new product.” It’s surpassed “challenge” as the most overused and empty word in the language.

That said! I am, um, stoked! Yeah, that’s the ticket! Stoked about Strength in Numbers. It’s got Bitcoin, it’s got cryptography, it’s got action and adventure and bang bang pow. It’s going to be fun to write. No angst in this one to cause me grief! (I always say that, and then, I end up with scenes like Albeus in the Civil War in Werewolves…sigh.) Oh, and yes, of course, Marc and Jesse’s complicated sexual games and their developing relationship.

Werewolves is beloved by those who read it, but it’s not doing any bank. So from now on, unless something changes in Bradistan, it’s got to be a bounce between Brad books and Adam/Derek books, while I try and claw out a new, more lucrative kingdom.

The master plan is to wrap up Colum this winter with one more story, and write, yes, two more Rob the Daemon stories to wrap that up by next summer. (I’m going to Berlin in June and I had this vision of the whole thing climaxing among the ancient treasures on Museum Island…which of course I don’t want to write until after I’ve been there.)

But…even if Adam and/or Derek were to get huge, it’s still possible that I may continue to write some Brad books. I’m totally ADD – I cannot fathom writing one book a year, year after year, with the same character, over and over…I’d go mad. I need to just change channels and do something different, all the time. Bouncing from cybercrime to werewolves to space parables about counterinsurgency to Vikings to occult comedy to… Yeah. The way I pre-cook each book is to forget about it while I do something totally different, to write werewolves while cybercrime percolates in my subconscious, etc. 100% focus on any one single thing is just not for me.

2 Comments on Adam Vance is almost done…Marc and Jesse on the launch pad!